I am usually the person who gave people beadworks as gifts. But I myself got a beaded C60 as a gift from Mr. Horibe on our visit to his home. And the next day, when he participated my workshop in Nagoya, I got another giant torus as a gift. 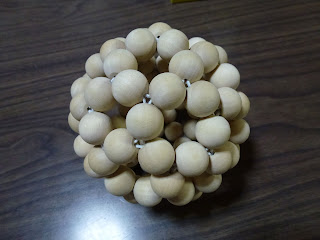 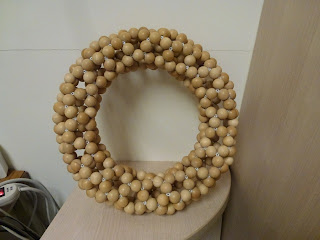 His model is quite different from mine because most often he used only a single elastic rubber band with exact length to make his beadworks. In this sense, the path of his elastic string exactly corresponds to the Hamiltonian path exactly and has, of course, the minimal length for a particular model. So, the elastic string passed every bead in the model twice and only twice. To avoid beads fall apart, Mr. Horibe then made a knot in the end. So you can pull or press his bead models to some extent.

Possibly due to his training as mathematics teacher, he always uses a single string even for structures that contain more several thousand beads. I was quite surprised when I just heard of it. Just imagine how one can use a single string to bead the giant green stellated dodecahedron as shown in the following photo. The problem is that it would become very difficult to bead with such a long string. The good thing is that the path of string in his case is really a Hamiltonian path no matter how many beads a model contains. I guess that he also needed to plan well before he started because it is not always trivial to find out the Hamiltonian path. Sometimes, we just got trapped as weaving process goes. I don't know how he managed to do it with only one string especially for certain structures that has more than several thousand beads. 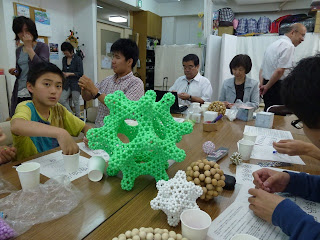 Another practical aspect about using elastic string is that elastic string is much thicker than the Nylon string I typically used. I suspect that it may not easy to pass it through three times through a hole. But of course, it is not a good idea to pass string through some beads twice, but some other beads three times because that will make the tension generated by the rubber band uneven throughout the structure. There is no such problem for the Nylon string because the bead models made by Nylon string are usually quite strong and hard. So it is harder to deform them like the model made with elastic rubber band.
Posted by thebeaedmolecules.blogspot.com at 9:13 AM