There are many possible VB diagrams for C60. Many of them are still symmetric. The bead model I showed in the previous post corresponds to the kekule structure of single hexagon rotated by one beads, which leads to a fusion of three pentagons into a trefoil. One can also perform this operation on the remaining 9 pentagons at suitable 3-fold axes to produce an interesting pattern which looks like a tiling of four trefoils on a sphere. 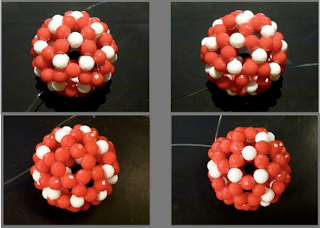 It is easier to see this pattern with four trefoil tiles using a schematic plot.

(I would be happy to recommend this chiral pattern with T symmetry on a football for the FIFA next time!)
Posted by thebeaedmolecules.blogspot.com at 12:12 PM No comments:

Labyrinth on a buckyball

Using the idea I introduced in the previous post, we can create 220/20 different patterns of labyrinth for C60! The basic idea is to start from the original VB pattern with icosahedral symmetry which I will call the canonical VB structure. Each of 20 hexagons on C60 has two local Kekule structures. We can apply a six-fold rotation to switch them from one to another. In total, we have 220/20 possibilities. But there are still many over-countings. Working out all distinct VB structures is a nontrivial combinatorial problem. Possibly someone has already done it. 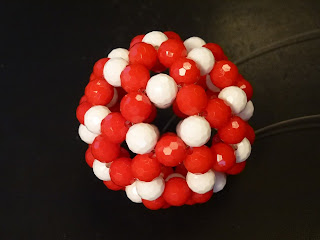 Posted by thebeaedmolecules.blogspot.com at 9:53 AM No comments:

I recently communicated with Prof. Gillespie about the bead model of fullerenes. He raised a few questions on the way I interpreted the hard-sphere repulsion and its connection to the VSEPR (Valence shell electron pair repulsion) theory for AX3 systems. (Even though, I am trying hard to convince him that this correspondence with suitable interpretation of beads. He still doesn't think bead model provides an example of VSEPR.) Through the discussion with him, I was inspired to look at the meaning of color beads more carefully.

In all of my previous bead models, I adopted a simple color scheme which is basically using a different color for each kind of nonhexagons. For a shared edge between a hexagon and a nonhexagon, we use nonhexagon's color for that shared edge.


However, we can also adopt a color scheme which has more chemical meaning simply by assigning one color to single bonds and another color to double bonds. From elementary chemistry, we know that each carbon atom has four valence electrons and should form four chemical bonds with its three neighbored carbon atoms in a fullerene. So we should also impose the following rules for arranging single and double bonds to satisfy the correct electron counting and molecular stability:

1. Surrounding each carbon atom, there are four electron pairs corresponding to two single bonds, and one double bonds, which can be represented by two white beads and one red bead, respectively.
2. Two connected double bonds (neighbored red beads) are strictly forbidden.
3. Three single bonds surrounding a central carbon atom will have an extra electron left without bonding and should correspond to a radical. This pattern is not energetically unfavorable and should be avoided either.

Each particular arrangement of single and double bonds correspond to the so-called valence bond (VB) structure. Usually, many VB structures can be found for a particular fullerene. A simple rule of thumb from quantum chemistry is that the more VB structures a fullerene has, the more stable the corresponding fullerene is. The ground state wave-function of the fullerene can be approximately expressed as a superposition of these VB structures.

Finding and enumerating all possible arrangements of single (white beads) and double bonds (red beads) in a fullerene with the above constraints is nontrivial.

As I have pointed out, the color pattern of C60 generated by the color scheme we used before corresponds to the most important VB structure of C60. Basically, in this VB structure, each of 12 pentagons consists of five single bonds and each of 20 hexagons consists of single and double bonds alternatively. One can in principle generate many more VB structures by rotating the single- and double-bond pattern in any of hexagons by one bond unit. This transformed hexagon is another Kekule structure of that hexagon. 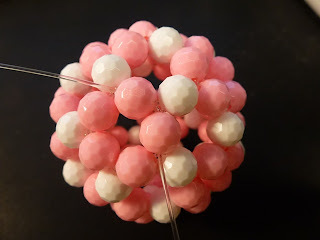 In addition to C60, I just constructed a bead model of C70 with a color pattern in consistent with one of its VB structures. It is not hard to see the beautiful labyrinth pattern for this particular color scheme. Although I don't have a proof, I suspect the generality for the existence of labyrinth pattern in the bead model (using this color scheme, of course) of any fullerene without free radical, i.e. carbon only with three single bonds (white beads in the following picture). 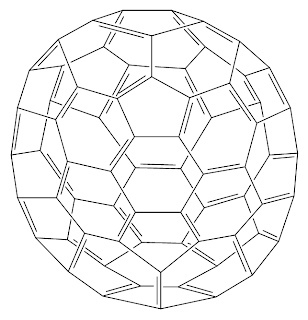 The corresponding bead model with a colored VB pattern: 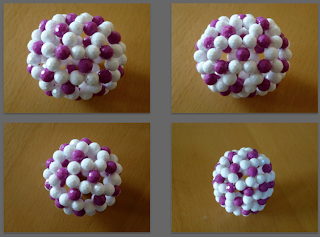 Posted by thebeaedmolecules.blogspot.com at 3:46 PM No comments: 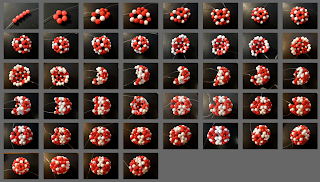 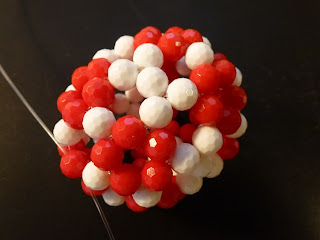 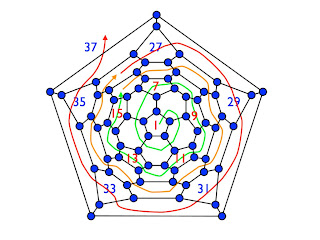 The red and green parts of spiral are exactly the same as the spiral of C60. The orange part of the spiral is a ring of 10 hexagons inserted in between two hemispheres of C60! Of course, instead of inserting one ring of 10 hexagons, one can do it repeatedly to get different length of endcapped carbon nanotubes! So C70 is the shortest endcapped carbon nanotube.

Note also that the blue circles in this graph are not beads! Beads represent edges or chemical bonds of fullerenes.

I made a few bead models for Prof. Gillespie, who proposed the the famous VSEPR method, last week. This C70 model is one of them.
Posted by thebeaedmolecules.blogspot.com at 10:30 AM No comments:

I took a few photos for making bead model of C60. This will be helpful for learning the so-called figure-eight stitch (or right-angle weave) and the beading rule of C60 I mentioned before. 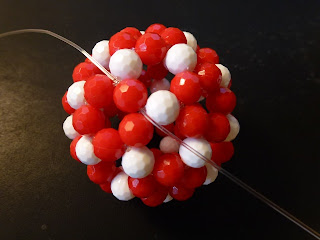 * General instruction:
1. There are 32 polygons consisting of 12 pentagons and 20 hexagons in a C60.
2. Every pentagon is separated from neighbored pentagons by eactly one CC bond.
3. If we choose one color of beads for pentagons and the other for the rest, one would find hexagons made of two colors alternatively.
4. It is better to view C60 as a sphere consisting of six layers of polygonal strips. For the south semisphere, they are basically a pentagon for the south pole, five hexagons next, 10 polygons consisting of 5 pentagons and 5 hexagons. Reverse the beading sequence, one gets the north semisphere. (This is what people called the spiral code.)
5. One has to check how many beads of group one wants to create in the next step. Some beads are already done, so one has to thread the fishing cord through these beads first, then add the remaining beads through the other end of fishing cord, and finally, form the n-bead group by threading the fishing cord through the last bead just added along the opposite direction.
Of course, one should always check the sequence of colors of beads one is going to bead and make sure that they satisfy the color coding mentioned in 3.
For beginners, this is usually the hardest part and mistakes occur easily. Most often, wrong number of beads are added or some beads are not threading through first. But, if one can pay attention to the number of beads in the next group one is going to make, it should be trivial to figure out how many beads are already there and how many more one should add.
If two colors of beads are used, one can simply pay attention to color. Beading process for a C60 becomes trivial.


The beading procedure can be summarized by the spiral code on the following Schlegel diagram of C60. For C60, it is [1 7 9 11 13 15 18 20 22 24 26 32], which is essentially the positions of pentagons along the spiral path starting from south pole to the north pole. It is not hard to find this code is the only information we need to create a bead model of C60. Similarly, one can create any other cage-like fullerene by its spiral code only if the fullerene possesses it.

A list of fullerenes up to 100 carbon atoms is given in the appendix of the book "An Atlas of Fullerenes" by P. W. Fowler and D. E. Manolopoulos. So one can create any fullerene easily by following its spiral code. The shape of the resulting bead model is basically consistent with the corresponding fullerene. 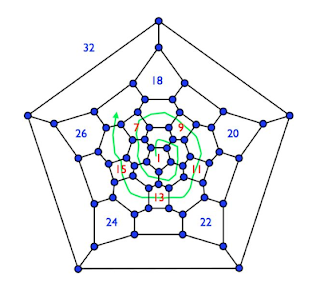 Posted by thebeaedmolecules.blogspot.com at 10:25 AM 3 comments:

I cut off all loose ends of fishing threads. It looks pretty. This model is the largest one (about 22.5cm x 22.5cm x 22.5cm) among all beadworks I had now. Again, I used two different colors of 6mm beads to make it. Red beads are used to make 7-bead groups (heptagons) and white beads for the other 6-bead groups (hexagons). CNTs in this structure belong to the zigzag form of CNTs. 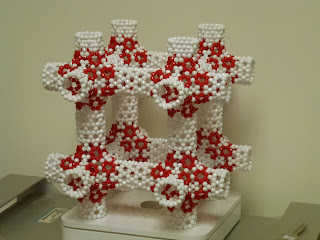 I spent time to finish up this structure made of 12 interpenetrating carbon nanotubes (CNTs) last weekend. Compared to the G-surface, this structure is not that complicated. Once one figures out the structure of node that connects three different perpendicular CNTs, the rest is hard work. One should be able to see how the arrangement of heptagons in a node is related to the inner part of a toroidal carbon nanotubes (TNCTs). 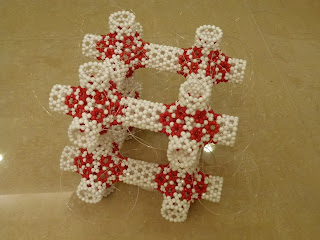 Posted by thebeaedmolecules.blogspot.com at 3:01 PM No comments: