Mr. Horibe (Horibe-San) just informed me a beautiful beaded structure he made with a single string! The address is here: http://horibe.jp/JPGBOX/3540BOX/Beads3540_ss.htm.
BTW, he also made an animated sequence of the whole beading procedure using Javascript for this structure. We can see how he managed to make each node sequentially along a Hamiltonian path on 12 vertices of a dodecahedron and a Hamiltonian path through each face within a node. It looks great! 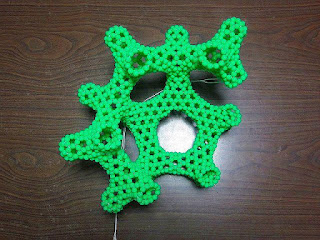 Posted by thebeaedmolecules.blogspot.com at 10:33 AM No comments:

I wrote a simple matlab script to generate the 3D structure of the C20 Sangaku problem. The first one is viewed from a 3-fold rotational axis and the second one is grom the 5-fold axis. Following the original problem as shown in the previous post, I used blue color to denote ten small spheres located on a great circle. 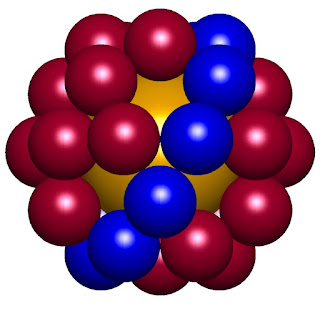 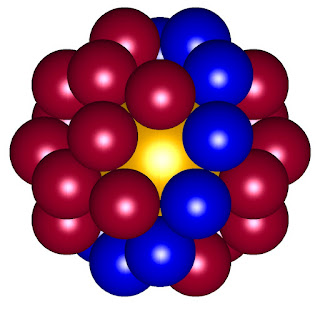 Posted by thebeaedmolecules.blogspot.com at 2:27 PM No comments:

In the Meiji era, mathematicians of Japan didn't use trigonometry to prove R/r=sqrt{5} for the problem about a big ball covered by 30 small balls. I doubt that they knew the trigonometry as we know today. Instead, a regular pentagon as shown in the following figure was recognized. Then the answer follows naturally. It is a smart proof, isn't it? 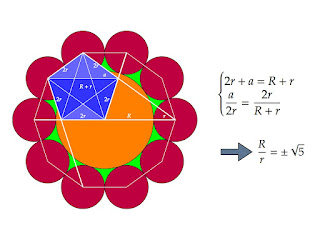 Posted by thebeaedmolecules.blogspot.com at 11:51 AM No comments:

Some photos from the 3rd International workshop between College of Science, National Taiwan University and Faculty of Science, Okayama University

Early this month, I gave another workshop for the 3rd International workshop between College of Science, National Taiwan University and Faculty of Science, Okayama University, which is a one-week workshop for undergraduate students from both universities. Most of courses offered in the workshop were advanced chemistry courses such as quantum chemistry, biophysical chemistry, inorganic chemistry, etc. Mine is the simplest one, though. No any background in science or chemistry is required. I gave a half-hour background introduction before participants started to make their own buckyballs. Below are some photos from the workshop: 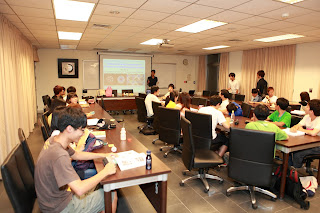 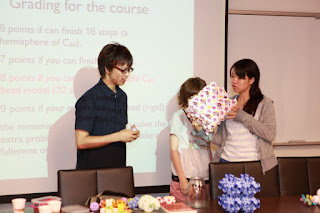 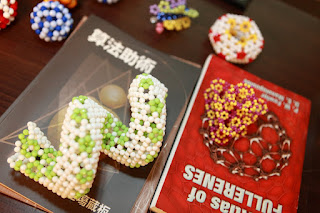 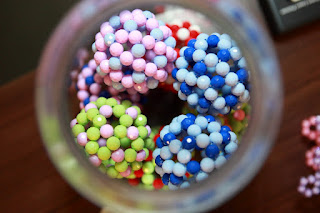 First page of my slides: 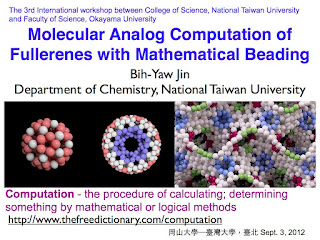 Posted by thebeaedmolecules.blogspot.com at 6:24 PM No comments:

Email ThisBlogThis!Share to TwitterShare to FacebookShare to Pinterest
Labels: workshop

One more picture of super buckyball 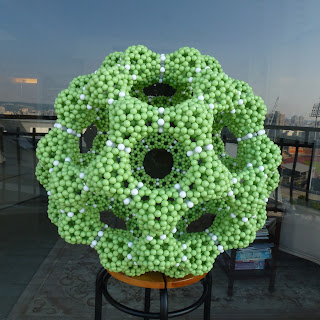 Posted by thebeaedmolecules.blogspot.com at 4:17 PM No comments: 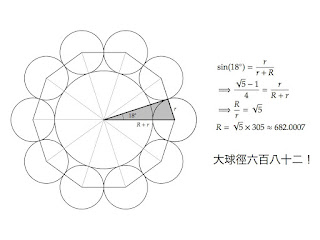 Even though the original drawing for this particular sangaku problem is done by the black-and-white style, it may not be a bad idea to make a colorful version for the cross section: 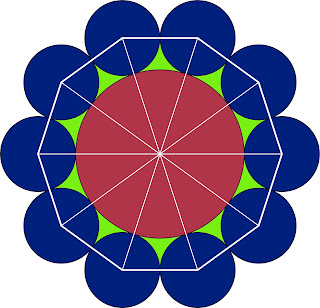 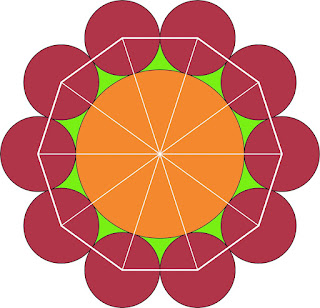 Posted by thebeaedmolecules.blogspot.com at 12:42 PM No comments:

In the book "算法助述" I got from Mr. Horibe, there is an interesting problem in pp. 51-52 as shown in the following picture. As I mentioned before, Mr. Horibe made two beautiful bead models with a large metal sphere inside. And more importantly, large and small balls have the correct ratio of radii, R/r=sqrt{5}. He told me that he gave one of these two models to Hidetoshi Fukagawa, the author of the book "Sacred Mathematica - Japanese Temple Geometry", because, through Dr. Fukagawa, he knew so much about these interesting Japanese sangaku problems. 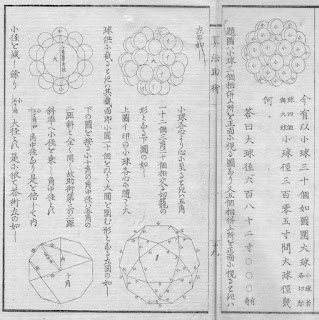 This Sangaku problem was originally proposed by Ishikawa Nagamasa and written on a tablet hung in 1798 in Tokyo’s Gyuto Tennosha shrine. I was quite surprised by that I could understand this ancient problem without any translation. It was written in Chinese (or Kanji):
"今有以小球三十個如圖圍大球，小球者各切臨球四個與大球，小球徑三百零五寸，問大球徑幾何？
答曰：大球徑六百八十二寸。"
In English:
Thirty small balls cover one big ball where each small ball touches four other small balls and big balls.
The radius of small ball is 305 inches. Find the radius of large ball.
Answer: The radius of large ball is 682 inches.
In the page 52 of the book, there are some explanations on how to reach the answer by noting that thirty balls are located on the thirty vertices of an icosidodecahedron. It was written with some Japanese characters which I don't understand. But it is not hard to guess the rationale. One can see that if one starts from an arbitrarily chosen small ball, then moves to next ball along a fixed direction, and then the next one along the same direction. Eventually, one would trace over exactly 10 balls which are located on the large circle of a sphere with the radius equal to the sum of radii of small and large balls. Using some trigonometry, one can get the answer.
Posted by thebeaedmolecules.blogspot.com at 9:12 AM No comments:

I posted a bead model of ethylene made by Qing Pang, a high-school student in TFG school. I don't like the way double bond is handled in her model because the channel (hole) orientations of two beads that used to model double bond is perpendicular to the bond orientation. I would prefer to have a bead valence model in which channel of each bead lies exactly along a particular bond. In the sense, to describe a double bond by beads, we need to use the banana bond representation of double bond proposed by Linus Pauling. This also means that, to construct a correct bead valence bond model of a double bond, we have to use a bead with a curved channel with an angle about 71 degree. I don't think one can get commercial beads which have channels with this particular angle. 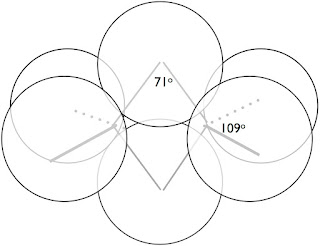 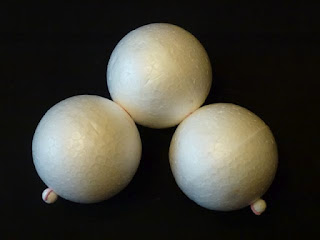 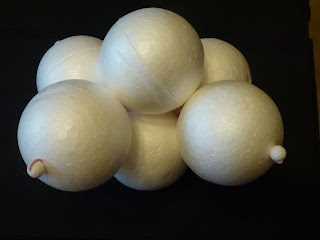 It is straightforward to construct valence sphere model of acetylene with five styrofoam balls. Three of these balls represent triple bond and the remaining two balls represent single C-H bonds. Using the elementary geometry, one can show that the angle of the curved channel for the ball representing triple bond is about 38 degrees. 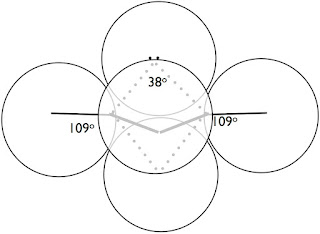 Posted by thebeaedmolecules.blogspot.com at 2:06 PM No comments: