We made a poster (in Chinese) for the "Chemistry in Action" held here in Taiwan to celebrate the International Year of Chemistry (IYC-2011).

Posted by thebeaedmolecules.blogspot.com at 10:37 AM No comments:

Previously, Bih-Yaw posted a beaded version of this molecule. It is one particular example of a "High-genus fullerene", where the phrase high-genus literally means "many holes", and fullerene is a nickname of a family of cage-like molecules that consist of exclusively graphitic carbon. You can view these molecular structures as two-layered figures. And it is exactly the holes that connect the two layers.

Here we shall inspect the molecule, which is composed of 380 carbon atoms, layer by layer. Readers can then follow this route to construct their own beaded version of the structure. However, please bear in mind that beads should be placed at the edges of the figure. Bead represents chemical bond instead of atom despite of its round shape.

The inner layer is composed of 20 nine-member rings (nonagon):

They sit at the threefold rotational axis of icosahedral symmetry, similar to the hexagons in the pattern of a soccer ball. We notice that there are twelve fivefold symmetric holes each surrounded by five nonagons. It would not surprise a mathematician that these holes are located at the fivefold rotational axis of icosahedral symmetry, and again, similar to the pentagons of a soccer ball.

Next, each of the holes is crowned with five extra heptagons. Simple arithmetic tells us that there are total sixty of them.


Finally, the molecule is completed by filling out the space between the holes with hexagons. There are ninety of them in total.

Another photo of the smallest HG fullerene 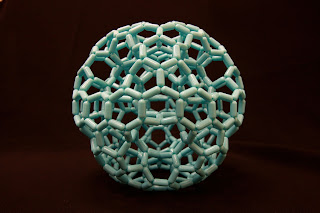 Photo taken by J.-H. Hwang.
Posted by thebeaedmolecules.blogspot.com at 10:02 AM 4 comments:

One can view C60 or a buckyball as the simplest graphitic sheet embedded in a sphere with every pentagon connected to five other pentagons by only single carbon-carbon bonds. In this sense, C168 can be viewed as the "buckyball" in the hyperbolic space with every heptagon connected to seven other heptagons by only single carbon-carbon bonds.

I made a bead model of C168 that consists only of one tetrapod (half unit cell). So only 84 carbon atoms are included in this structure. The structure I posted previously contains 5 unit cells. 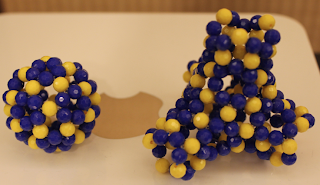 Posted by thebeaedmolecules.blogspot.com at 5:35 PM No comments:

I have recently found that the right angle weave we used to construct all of beadworks is commonly called the figure eight stitch （八字編, or pronounced as Baji-Bian）here in Taiwan because the weaving path looks like a Hindu-Arabic numeral eight. I guess it has the same name in China. In Japan, the same weaving technique is called the Hachinoji-Ami or Kousa-ami stitches, which has literally the same meaning as Baji-Bian or figure eight stitch.

Apparently, it is better to call this technique as the figure eight stitch than as the right angle weave because angles generated in the figure-eight stitch may not be right angle at all.
Posted by thebeaedmolecules.blogspot.com at 12:46 PM No comments: 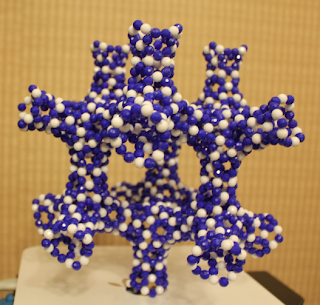 Click the keyword C168 below to see more discussion on this structure.
Posted by thebeaedmolecules.blogspot.com at 12:20 AM 1 comment: 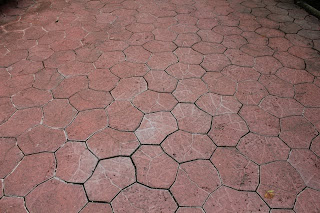 Posted by thebeaedmolecules.blogspot.com at 10:45 PM No comments: 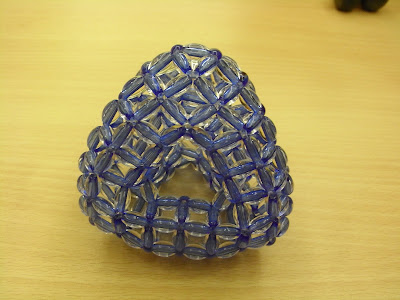 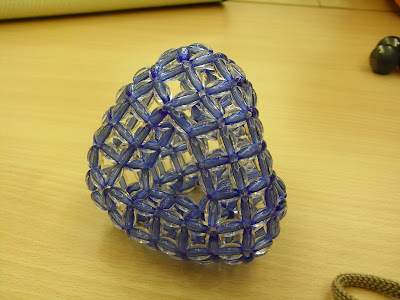 You need to have Java installed to see the above figure.
Posted by Chuang Chern at 10:03 PM 2 comments: