Super Buckyball as a Molecular Sculpture

I have written an article about super buckyball, Super buckyball as a molecular sculpture - its structure and the construction method (分子雕塑─超級珠璣碳球的結構與製作), in Chinese recently. I guess it will appear in the next issue of CHEMISTRY (The Chinese Chemical Society, Taipei) (化學季刊), a local chemistry journal in Taiwan. I tried to describe the construction method of the super buckyball in details in this paper. Also, in the reference 1 of this paper, I commented on how this paper was inspired by the Horibe's works, particularly, the idea of fusing many C60s into structured super fullerenes, which is the way I understand many of his beautiful models. I wrote it in Chinese because I hope local high-school students in Taiwan can read the paper more easily and reconstruct the model as a school activity. 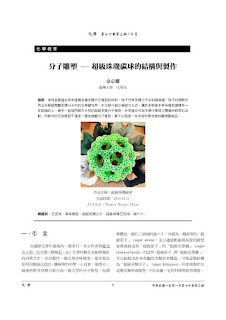 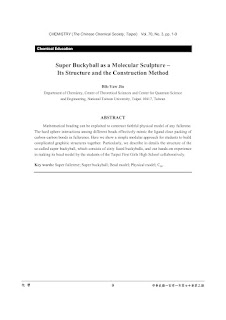 Super Buckyball as a Molecular Sculpture − Its Structure and the Construction Method
Bih-Yaw Jin
Department of Chemistry, Center of Theoretical Sciences and Center for Quantum Science and Engineering, National Taiwan University, Taipei 10617, Taiwan
ABSTRACT
Mathematical beading can be exploited to construct faithful physical model of any fullerene. The hard sphere interactions among different beads effectively mimic the ligand close packing of carbon-carbon bonds in fullerenes. Here we show a simple modular approach for students to build complicated graphitic structures together. Particularly, we describe in details the structure of the so-called super buckyball, which consists of sixty fused buckyballs, and our hands-on experience in making its bead model by the students of the Taipei First Girls High School collaboratively.
Posted by thebeaedmolecules.blogspot.com at 4:12 PM No comments:

It's been a while since last time I wrote on this blog. Three weeks ago, I went to the Bridges 2012 conference held at Towson University, MD. It was such a terrific gathering of practitioners of mathematical art. I met a lot of new friends and enjoyed sharing our ideas with each other. The following is a repost of a graphitic structure I found last year when I was a research assistant of Bih-Yaw. It is a D3-symmetric trefoil knot structure and comprises 318 carbon atoms.

I figured out its construction rule while pondering on one of Escher's artwork. 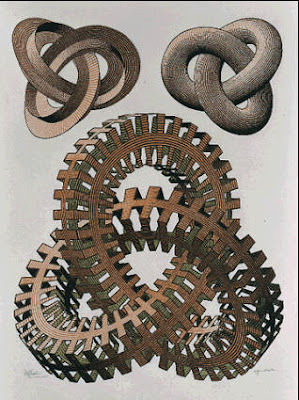 Upon scrutinizing the one at the upper-left corner, I found that the trefoil knot can actually be decomposed into three 270-degree-arc and three inter-arc straight segments. This was a huge hint for me since I've been thinking about constructing torus knots from carbon nanotubes for years. An idea came up when I was doing my MS degree with Bih-Yaw, three years after he mentioned this project to me, which basically makes use the fact that one can divide a (p,q) torus knot (for p smaller than q). An example of this building principle applied to the trefoil knot is shown below:

Interested readers can also refer to the "Torus Knot" tag in this blog. A truly unfortunate fact is that this kind of molecules does not seem to be "beadible" to me, since it has got a great deal of tangential stress along the tangent of the central curve. Unless one lets loose the fish line during the course of the beading process, eventually when she or he tries to sew up the closed structure an unsurmountable stress will be encountered.

I didn't want to stop there, and finally I got the inspiration from Escher as mentioned above. The structure possesses nearly zero tangential stress when you try to bead it. Another nice point about it is that it has got much less number of atoms in it, compared to the other construction scheme. It typically takes me less than three hours to bead it.

At the Bridges conference, I met two kind Taiwanese ladies Helen Yu and Joy Hsiao. The pair of enantiomeric C318 trefoil knots as shown in the following photo was given to them as souvenirs. 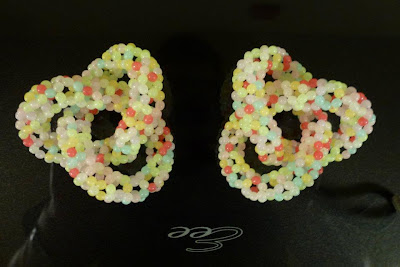 They are made of 3mm glow-in-the-dark beads. I'm thinking about presenting this type of structures in the Bridges next year, hoping that I have the chance to go.

A workshop for a local meeting on Cognition and Digital Education

I am going to give a special exhibition and a workshop for a local meeting on Cognition and Digital Education which will be held in the main campus of National Academics of Educational Research (國家教育研究院) the Sanxia county (三峽) on Aug. 18 (tomorrow). The meeting is supported by the Math and Information Section of the National Science Council of Taiwan. 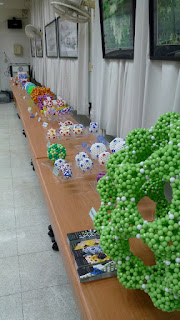 Posted by thebeaedmolecules.blogspot.com at 12:00 PM No comments:

I took this picture of hyperbolic lettuce made of beads in Yan-Ping North road, where you can find many craft stores, a few months ago. It is amazing that people have made so many interesting geometric models with beads for a long time, possibly without knowing the underlying mathematics. 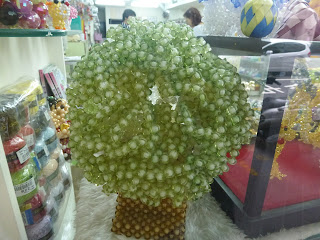 Posted by thebeaedmolecules.blogspot.com at 6:53 PM No comments:

Email ThisBlogThis!Share to TwitterShare to FacebookShare to Pinterest
Labels: hyperbolic

I found that it is much easier to use commercial beads to make the so called styrofoam/rubber band models of L. C. King. According to Prof. H. A. Bent, every student of chemistry should make a set of this kind of models for learning the concept of chemical bond. Here, I will show how to make valence sphere models using 25mm wooden beads and rubber band with 8mm small plastic beads as endcaps.
1. To make the valence sphere model of a methane which has the tetrahedral shape, we can connect two wooden beads (two-bead unit) first as shown in the following picture: 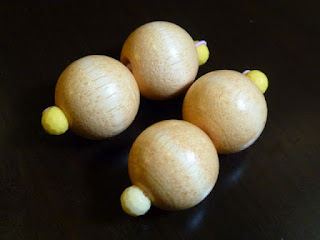 Then cross two two-bead units with each other to get a tetrahedral methane: 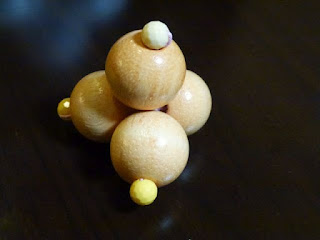 2. We can easily generalize the procedure to molecules with six valencies. First make another two-bead units with rubber bands, then cross it around the tetrahedral four-bead unit we just made. Then one should get an octahedral arrangement of six beads as shown in the following picture: 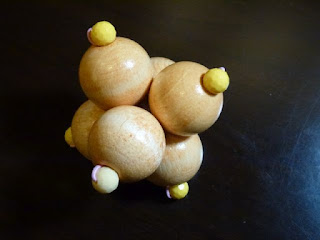 3. One can also try to make a five-bead unit which represents the valence sphere model of a molecule with dsp3 hybridization. 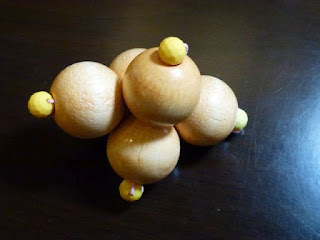 4. Valence sphere models for molecules with more than one center such as the ethane can easily be made too. Here is my procedure for making the valence sphere model of an ethane molecule: first I connect a three-bead unit and two two-bead units as shown in the following picture. 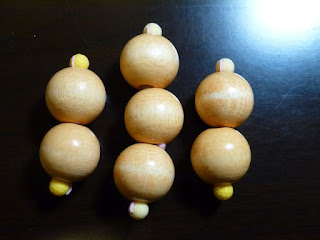 Then, connect these three units at suitable positions, one should get the valence sphere model for the ethane. 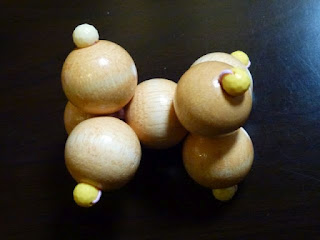 Posted by thebeaedmolecules.blogspot.com at 9:03 AM No comments:

A few months ago, I decided to donate the two zometool models of quasicrystal and six-layer carbon onion to the National Taiwan Science Education Center (NTSEC, 國立臺灣科學教育館). Finally, Hsin-Yu, Yuan-Chia and some other students of mine moved these two models to the NESEC last week.
Originally, due the the tight budget, we couldn't really make the complete zometool model of quasicrystal consisting of stellated rhombic triacontahedra up to the second level. Fortunately, Ms. Helen Yu, the owner of a local Kindergarden, kindly supported us to finish this two-level quasicrystal structure. Here are a few photos from the special activity with kids from the Helen's Kindergarden.
Yuan-Chia and Hsin-Yu explained the construction rules to Kids: 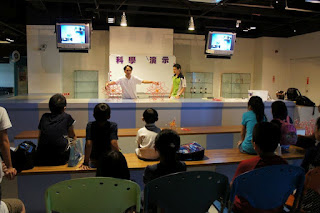 Kids were working on the basic units: 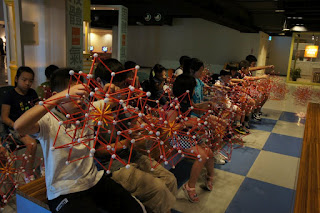 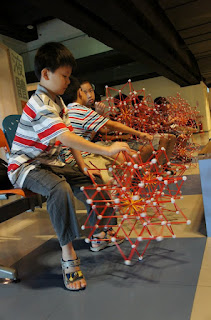 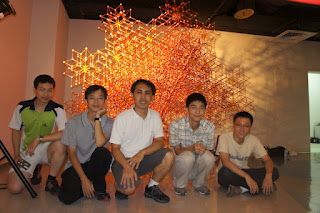 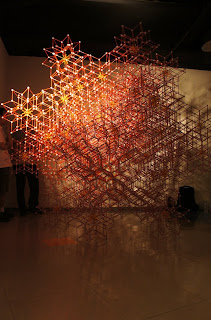 Posted by thebeaedmolecules.blogspot.com at 10:44 PM No comments:

Bead models can be viewed as a kind of valence sphere models (or tangent sphere models 價球模型或是切球模型), in which beads represent electron pairs. Similar idea using styrofoam balls and rubber band has been exploited in the 60s by L. Carrol King, a chemistry professor in the Northwestern university. Here is the first styrofoam ball/rubber band model of methane that I made. 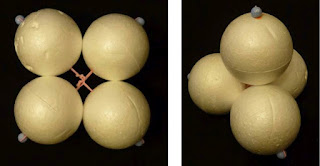 Many people use this model to illustrate the valence sphere electron repulsion theory (VSEPR) for molecules with four valence electron pairs. We can easily see that the energy of the model in the square planar configuration is higher than that in the tetrahedral configuration. But one has to be careful in the interpretation because the energy difference in the total energy of these two configurations is from the elastic energy of the rubber band, instead of the repulsion energy among four hard spheres.
Posted by thebeaedmolecules.blogspot.com at 8:41 PM No comments: