Another Resonance Structure of C60 I also tried to make another resonance structure by only paying attention to the local condition. But at the last loop, I found that I couldn't satisfy the local condition any longer. So I used a red bead to show this frustration. 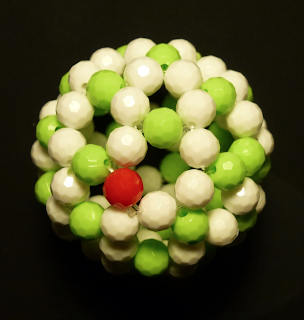 Posted by thebeaedmolecules.blogspot.com at 10:50 AM 2 comments:

Equations of States for Election (選舉狀態方程式)

(WARNING) This post has nothing to do with beading.
I still hope that some of you might be interested in the discussion.
At the beginning of the 2008 election year, the local Kuomintang (KMT) party of Taiwan had a landslide victory in parliamentary election by winning the 80% of the seat out of 58% of the total population votes. Here, I have recalculated the fractions of seats and votes based on the two-party approximation, i.e. I ignored all other votes except those voting for the two major parties, KMT and Democratic Progressive Party (DPP). The apparent disproportionation raises some puzzles on the fairness of the new electoral system just adopted for the election, in which only one representative get elected in a single district. However, this is very similar to the electoral system adopted by the US presidential election - winner of a state get all electoral votes of that state. So I guessed one might be able to see some empirical correlation from the US presidential elections of past one eighty years (1932-2004).
Figure 1 shows the relationship between the fractions of electoral votes vs. popular votes for US presidential elections since 1932 (Franklin D. Roosevelt won the election in that year.) Here x is defined as the fraction of popular votes obtained by republican's presidential candidate and y is defined as the fraction of electoral votes obtained by republican's presidential candidate. Interestingly, x and y are very similar to mole fractions commonly used in chemistry.
As an example from the US presidential election in 2000, Bush vs. Gore, we have popular votes: 50456002 (Republican) 50999897 (Democrat) and electoral votes : 271 (Republican), 266 (Democrat). Thus, in this case, x=0.497, y=271/(271+266)=0505. 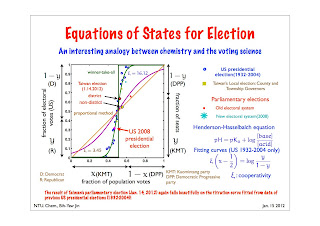 The resulting data (blue circles in the figure) look like a titration curve, which can be fitted by y=tanh(ξ x) pretty well (blue curve). As a chemist, I deliberately write this curve in the form of the Henderson-Hasselbalch equation with an extra parameter ξ, denoting the cooperativity effect. There are fluctuations around the fitting curve, of course. That is the reason why G. W. Bush got elected, even though Gore had more popular votes in 2000. Additionally, this equation is symmetric, meaning that the electoral system is basically fair. But the fraction of seats of one party is a highly nonlinear function (close to a step function) of fraction of votes. The small parties are hard to get any seat in the parliament. Also, this equation does not say that we can predict the result either since we still need to know the fraction of votes, which is impossible to know before the election.
OK, all these data are already there before the 2008. What I found is that the 2008 re-election of legislative representatives of Taiwan fell pretty well on the same fitting curve or equation of states for a particular electoral system.
Later that year, in US presidential election, B. Obama got elected as the 44th president of United States by winning the 52% of popular votes and 67% electoral votes, which is again described by the election curve pretty well.
Now, we have a re-election of the legislative representative again in Taiwan yesterday (Jan. 14, 2012).
The results go like:
Fraction of total votes obtained by these two parties: (KMT: 48.18%; DPP: 43.8%)
Rescale the ratio by considering only these two parties: (KMT:52%; DPP: 48%)
Seats obtained by these two parties (KMT:44; DPP: 27)
Fraction of seats obtained by these two parties (KMT: 62%; DPP:38%)
This result satisfies the empirical equation of states for our electoral system pretty well. I consulted some local experts on election a few years ago. They told me this correlation is well known to them. However, the information I got from the media seems to contain so many details and is usually not very useful for getting a big picture. If this empirical relationship is valid, one might still need to provide a microscopic interpretation possibly based on some sort of statistical theory or ensemble theory that chemists and physicists commonly used for making connections between microscopic states and macroscopic properties.

slides of a talk I gave in Nov. 2008 right after US 2008 presidential election

I am planning on writing some articles in Chinese about beading and science for the local science magazine "Science Monthly (科學月刊)". The first article entitled "八字編與正多面體" (Figure Eight Stitch and Platonic Solids) in this series "珠璣科學 (Zhu-Ji Science)" has just shown up in pp. 72-73 of the January issue.
According to the ancient Chinese dictionary Shuōwén Jiězì (說文解字）, published in the early 2nd century around the Han Dynasty, Zhu(珠）means pearls of mussel (蚌之陰精); Ji(璣) means nonspherical beads or small beads (《釋文》璣，珠不圓也。字書云：小珠也。). Usually, Zhu-Ji (珠璣) are used together to mean very precious things or pearls of something.
I will talk about C60 and its bead model in the next article.
Posted by thebeaedmolecules.blogspot.com at 6:40 PM No comments:

Molecular Modeling of Fullerenes with Beads

I wrote an article, Molecular Modeling of Fullerenes with Beads, with Prof. Louis Cuccia and his coworkers last year. This article is now available on the Journal of Chemical Education website. The supporting material of this article gives a very detailed description on how to make a beaded C60.
Posted by thebeaedmolecules.blogspot.com at 12:33 PM No comments:

Email ThisBlogThis!Share to TwitterShare to FacebookShare to Pinterest
Labels: publications

Exhibition at the JMM meeting

There will be an exhibition about mathematics and art in the Joint Mathematics Meetings held at the Hall D (second level) of Hynes Convention Center, Boston from 1/4 to 1/7, 2012. Chern, Wei-Chi and I have three artworks for this exhibition. If any of you lives or happens to be in the New England close to the Boston area these few days, you are more than welcome to come and share your comments with us!! However, I will stay here in Taipei. Chern is now a graduate student at MIT and will show up in the exhibition room.
Photo took by Chern: 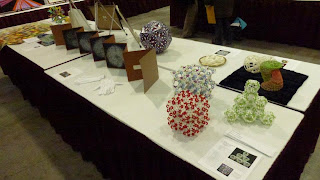 Posted by thebeaedmolecules.blogspot.com at 10:25 AM No comments:

Chern and I constructed many bead models of toroidal carbon nanotubes (TCNTs) in the last few years. We understand pretty well about the relationship among different kinds of TCNTs. Based on the spatial arrangement of 5- and 7-gons, we discovered that we can classify these achiral TCNTs into 8 structural types with well-defined latitudes and 5 other miscellaneous cases which may not have well-defined latitudes.
The eight bead models shown in the following photo are models for these eight canonical structural types. 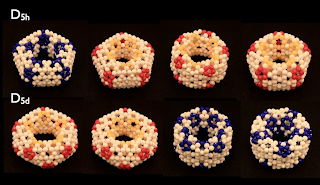 Chern and I submitted a comment about the structural rules described in a paper by Beuerle et al to the "Chem. Eur. J." last May. After seven months of extensive review, which is much longer than the typical one to two months, our paper was rejected a few days ago.
The referee suggested us that
"A revised version of the manuscript, not criticizing the paper by Beuerle et al but instead providing a detailed and at the same time accessible account of the classification of TCNTs, might be suitable for a more specialized journal."
1. F. Beuerle, C. Herrmann, A. C. Whalley, C. Valente, A. Gamburd, M. A. Ratner, J. F. Stoddart, Optical and Vibrational Properties of Toroidal Carbon Nanotubes. Chem. Eur. J. 2011, 17, 3868-3875. See also Hot topic on carbon from Wiley-VCH.
Posted by thebeaedmolecules.blogspot.com at 10:49 AM 1 comment: