Another photo for the Cat's eye gemstone

I took this picture with my Lumix. 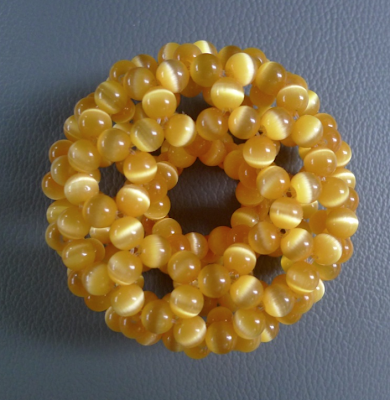 Posted by thebeaedmolecules.blogspot.com at 12:49 PM No comments:

I have made another two slides of CNT trefoil knot. They look different from the previous post.


This one use the graphitic sheet as background. 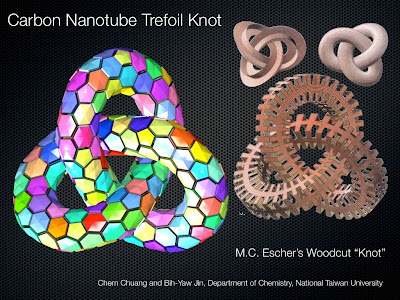 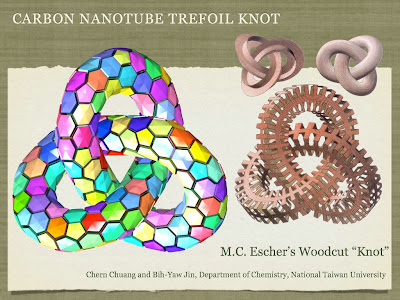 I took the heat of formation away. Hope that can make them more artistic.
Posted by thebeaedmolecules.blogspot.com at 9:04 AM 3 comments:

Cat's eye gemstones are perfect materials for making high-quality beaded molecules. Although the price for 6mm beads is more expensive that that of plastic beads, it is still within the affordable range. Here are another two T120s made from the 6mm cat's eye gemstones. I guess the raw materials for one T120 cost about US$10 dollars. 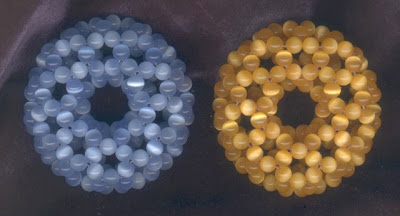 constructed by Chuang
Posted by thebeaedmolecules.blogspot.com at 2:08 PM 2 comments:

Carbon Trefoil knot? Is it possible to have a carbon nanotube curved like a trefoil knot or even bizarrer like a torus knot (CNTTK)?
Chuang has discovered a systamatic scheme to generate correct structures for a large family of CNTTR in his Ms thesis recently. Preliminary semi-empirical calculations based on AM1 show that these molecules could be quite stable. Of course, this doesn't mean it is straightforward to synthesize them.
In the following figure, I show the smallest stable carbon trefoil knot together with the famous woodcut of trefoil knot by Escher.
I believe that this kind of carbon torus knot have never been mentioned before, let along the efforts to find out the correct arrangement of nonhexagons on the tubule surface. 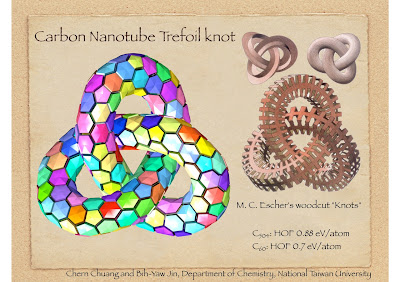 Posted by thebeaedmolecules.blogspot.com at 4:14 PM No comments:

Chuang and I have tried many different sizes of beads in the construction of beaded structures. From the local of stores in the Taipei area, we can find beads with sizes ranging from 3mm to 20mm. At the beginning, I made a lot of C60, T120, T240, and other toroidal carbon nanotubes with 4mm beads. These beads are quite small and the size of hole is even smaller. It is not easy to do weaving. The resulting structures are small too and look cheap to me. Since the effort to make a beaded molecule is basically quite independent of sizes, at least for beads ranging from 4mm up to 8mm, we decided to do at least with 6mm beads after about a year of playing with 4mm beads. So now most of our large beaded models were made with 6mm beads.

Here is one of early C60 made of 25mm transparent plastic beads (looks like crystal). To make the structure stable, we have to use very thick fishing line. To make a beaded model with beads of this size is quite different from those models with smaller beads (less than 10mm). The friction between the beads and fishing line seem to be too small to hold the structure together. The gravitation of beads become important at this size. So the final structure does not look like being holding by the string only.

Chuang had also made a T120 using the same size of beads. This model is big. Chuang used it as a pillow when he stayed in the lab late at night without going back to his apartment. Unfortunately, the structure is in fact not that robust and it breaked up in a few days before we had a chance to take a picture.

In additional to spherical beads we used usually, we have also tried beads with long aspect ratio. Beaded molecules created by spherical beads usually have much better stability since they effectively mimic the sp2 repulsion. But the disadvantage of spherical beads is that they don't look like the typical chemical bonds we have in mind, i.e. a long stick. Usually, spherical shape is reserved for atoms.
I have found several kind of beads with long aspect ratio at the local stores in Taipei city. The length along longer axis can be as long as 20mm sometimes.

Posted by thebeaedmolecules.blogspot.com at 1:10 AM No comments:

This is one of the eleven possibilities of Archimedean tilings of neck structures, which I've finished coding lately. Each vertex of the tiling is composed of three equilateral triangles and two squares.


The ms that I am currently working on is titled "Doubly and Triply Periodic Porous Graphitic Structures". I wonder if you have better suggestion to the title. I was first considering doubly and triply periodic quasi-minimal surfaces, since I am not sure that mathematicians would agree that these are minimal surfaces realized as graphitic structures. The paper on high-genus fullerenes that we've just published uses the word "high-genus". Although the periodic structures discussed in this new article are still made of neck structures, they may not be as high-genus as their 0D analogs since the genus value per unit cell is not-so-high.

A beaded model for 2-d periodic tile (Platonic tile) of graphitic structures made by Chuang a few months ago: 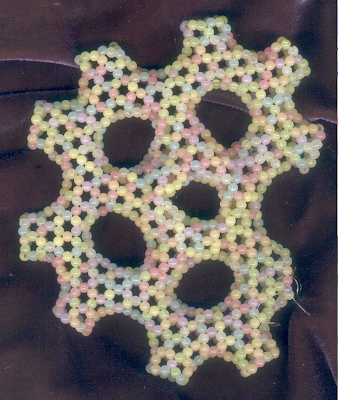 Posted by thebeaedmolecules.blogspot.com at 1:03 PM No comments:

I finished extending the original code in the appendix of my thesis last night.


This particular HGF has its triangular necks with g=0, i.e. there is no carbon atoms ``at'' the neck, with three decagons per neck. And it contains 1260 carbon atoms. However since I didn't actually patch decagons on the molecule, here is the original Matlab .fig file, which may provide a better look of the molecule.

(By Chuang on byjingroup blog, Sunday, October 18, 2009)
Posted by thebeaedmolecules.blogspot.com at 1:00 PM No comments:

Other uses of beads

Beads are not only useful for constructing complicated 3D structures of fullerenes, they can also be used to illustrate the surface structures and packing of liquid crystals.
I used these tricks for the general chemistry I taught last year.

1. Simply put in some beads to create a monolayer of beads. 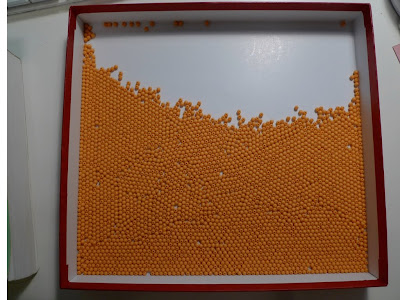 2. By inspection, one can see there are several single crystal domains separated by grain boundary. Vacancies can occur sometimes, :-) 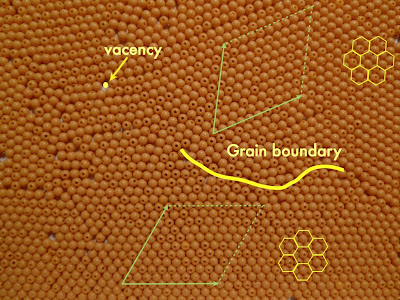 3. Multilayer structure can also be created easily by adding more beads. Shuffle the box slightly to make them more compact. 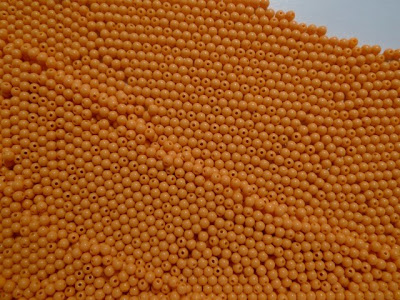 4. Beads with long aspect ratio can be used to model liquid crystalline structures! ;-) 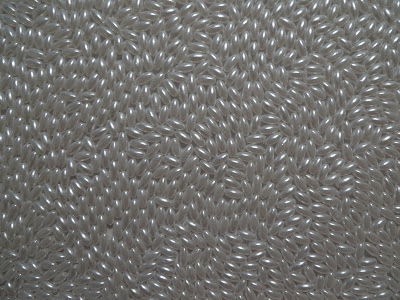 Posted by thebeaedmolecules.blogspot.com at 11:57 AM No comments:

More pictures of my beaded fullerenes 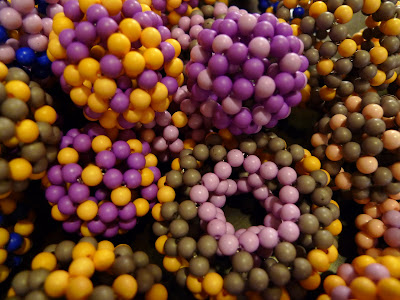 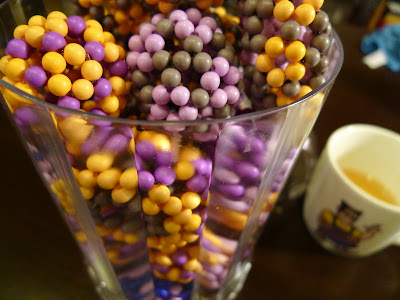 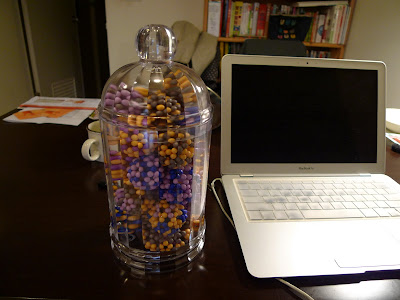 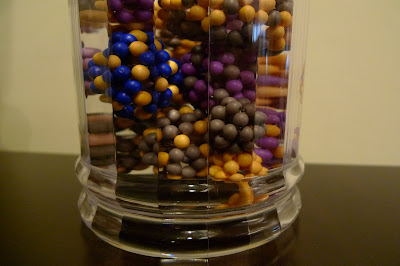 Posted by thebeaedmolecules.blogspot.com at 11:50 AM No comments:

I gave a one-day workshop on the beaded molecules for some junior high school students this summer (7/2-7/3/2009) at Taichung, Taiwan. Here is a picture about the workshop. 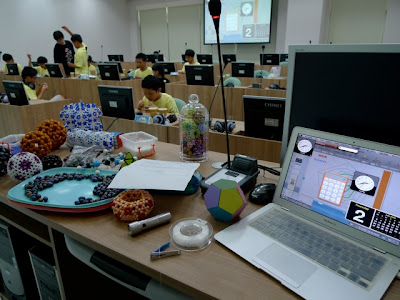 In the morning, after a brief introduction on the chemical bonding and a few simple molecular structures, I then started to teach student the platonic solids and basic weaving techniques by asking them to make a C20 (a dodecahedron). I simply asked students follow my instructions step by step without too much explanation. This is because, I think, it is important to have some hands on experience for constructing beaded fullerenes first. Some students can get the basic rules of weaving just after a few steps, others may take a longer time and kept asking me how to do the next step. But it took about an hour for all students to get the first project done. I also found that it is better to use larger beads around 10mm to 12 mm for students who have no experience in beading. To create a C20, one need 30 beads. So it is not too expensive even for a group of 50 students.

The next project in the afternoon was to construct a C60. Of course, before we started to do that, I explain the icosahedron, truncated icosahedron and a few background information on fullerenes to them. Unlike C20, where all atoms and bonds are equivalent, here we have two different bond types, 5-6 and 6-6 bonds, so it is natural to use two different color of beads for the construction. In fact, this is not a burden for weaving. Instead, color of beads can be used as a mnemonic aid for denoting the place of pentagons. One needs 90 beads to represent chemical bonds in a C60. Since students have some experience in the morning for making a C20, I find it convenient and more cost effective to use 6mm beads with two different colors for students to work on in this project. It took about 2 hours for most of students to construct his or her C60. 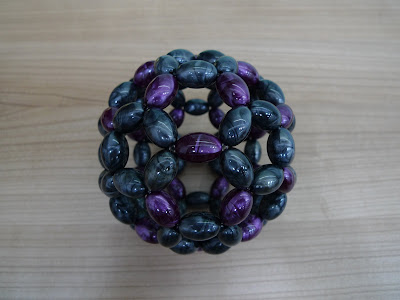 Posted by thebeaedmolecules.blogspot.com at 11:25 AM 3 comments:

I created a new P-surface with eight unit cells (2x2x2) using white and red beads last weekend. In total, 2880 beads are used. (Note that 90 beads are needed to create a C60.) Unlike previous two P-surfaces, I use red beads for octagons this time. The weaving process for creating a large beaded structure usually takes a long time and is prone to error.

Since the whole weaving process is essentially serial, the beads have to be added one by one along a single string of thread. So, once an error was made in the past, it is difficult to correct it without untieing all the beads up to that point the error was made.

The errors I made are usually something like using 9 beads to create an octagons (3 or 4 times out 128 octagons in the structure) and using 7 beads for hexagon (only 1 times). It is easy to understand why these errors occur more frequently for octagons, since it is more difficult to distinguish octagon and nonagon.

The first P-type structure Chuang and I made together has been given away to Bob Silbey as a gift in the summer of 2008. I made the remaining two P-surfaces by myself. 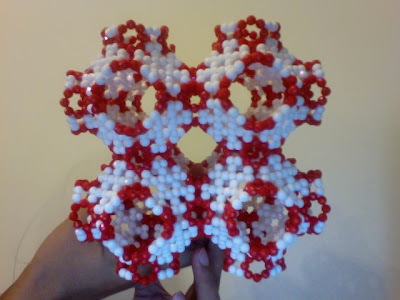 Silbey's 65 Birthday Symposium. I was in the second row far left. 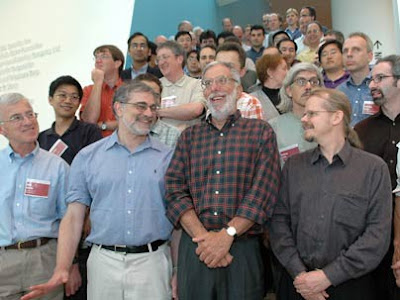 (photo taken from http://web.mit.edu/newsoffice/2005/silbey.html)
Posted by thebeaedmolecules.blogspot.com at 10:22 AM 1 comment: