Most of Horibe’s beadworks are made by single color. Unlike beadworks made by my group, I usually decorated nonhexagons with different colors or use colors to represent single and double bonds. Of course, this will spoil the color of hexagons and nonhexagons. It is not possible to use colors independently for hexagons and nonhexagons. There must be some polygons, which will be decorated with more than two colors when one chooses to use more than one color. According to him, that is the reason he usually used single color to do beading to avoid this situation. Only in a few examples he used two colors to illustrate some particular features. 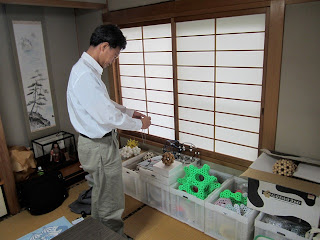 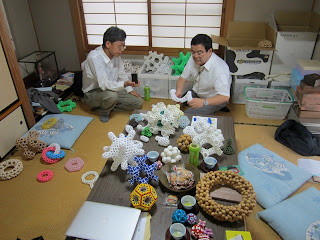 But, to chemists, using colored beads seems to be an obvious choice. Chemists have been using many kinds of molecular models to represent microscopic structures of molecules. It is quite common to use different colors to denote different kind of atoms. Now, in bead models, we move the emphasis from atoms to bonds. It is still apparent that one could also employ colors to mean different things. Faces in a molecular network do not have important chemical meanings as those of vertices (atoms) and edges (chemical bond). But more importantly, we would view the color pattern as a new dimension of beaded molecules, which can not only give geometric or chemical meaning, but also make them more visually pleasing.
Posted by thebeaedmolecules.blogspot.com at 5:49 PM