Beadworks from the viewpoint of a chemist

The difference that Mr. Horibe and I see these bead models is probably due to our different backgrounds. Mr. Horibe is trained as a math teacher, while I am a theoretical chemist. Even though I am acquainted with some basic mathematics for my own researches, I emphasized the chemical implication of these bead models as a method to realize nanoscaled molecules and materials. For instance, I recognized how to correctly interpret these bead models microscopically immediately after I my first buckyball with beads was done. And I also fully appreciated the power of mathematical beading as a new, and powerful method to make arbitrary fullerenes and, later on, further extended the method to arbitrary molecules.
Collaborating with Chern, now a graduate student of chemistry in MIT, we quickly became familiar with topological and geometric aspects of certain graphitic structures. Of course, Chern Chuang plays a critical role. He is very good at geometry, especially polyhedra and minimal surfaces. He also likes to make all kind of mathematical models since he was a high school student. He worked out the necessary mathematics for describing many interesting graphic structures systematically for his Master degree thesis. At the beginning, his focus was on the carbon nanotori with a goal to find out their general structural rules. We believe we have a good understanding of them now. The main findings are summarized in two papers:
1. Chuang, C.; Fan, Y.-C.; Jin, B.-Y. Generalized Classification of Toroidal and Helical Carbon Nanotubes J. Chem. Info. Model. 2009, 49, 361-368.
2. Chuang, C; Fan, Y.-C.; Jin, B.-Y. Dual Space Approach to the Classification of Toroidal Carbon Nanotubes J. Chem. Info. Model. 2009, 49, 1679-1686.
We also submitted a paper entitled “Comments on Structural Types of Toroidal Carbon Nanotubes” to Chemistry European Journal last year. In this paper, we summarized the carbon nanotori in thirteen canonical achiral structures, which are related to each other through three types of geometric maniputations, namely rim rotation, horizontal shift, and generalized Stone-Wells transformations. Unfortunately, the paper was rejected because of the criticism we had on the paper by F. Beuerls et al.
We quickly realized that we could systematically create quite generally a large family of graphitic structures using carbon nanotori as building blocks. This includes helically coiled carbon nanotori (carbon helices for simplicity), carbon torus knots, high-genus fullerenes, singly-, doubly-, and triply periodic minimal surfaces. Of course, one can also have all kind of variations of pseudo-periodic minimal surfaces by using heptagons instead of octagons. Part of this endeavor is summarized in "Systematics of Toroidal, Helically-Coiled Carbon Nanotubes, High-Genus Fullerenes, and Other Exotic Graphitic Materials" (Procedia Engineering, 2011, 14, 2373-2385) by Chuang, C., Fan, Y.-C. and me. These graphitic structures can be succinctly summarized as follows: 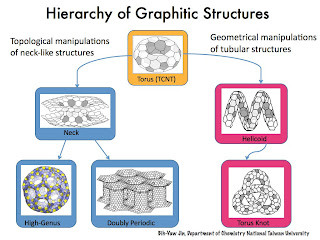 Posted by thebeaedmolecules.blogspot.com at 4:07 PM