The Shape of Beaded Mobius Strips

Although I know that one can form a mobius strip from a graphene nanoribbon for some time. I have never thought about making one by using beads. Part of the reason is that I am quite fond of making beaded fullerenes that contain nonhexagons. I have the belief that the structural stability of beaded fullerenes come from these nonhexagons and the hexagons play only a minor role in the stability.

We know that a carbon nanoribbon mobius strip (CNR-MS) can be form by twisting the strip 180 degrees and then glue two opposite ends of strip together. The CNR-MS consists of hexagons completely. Since there is no any nonhexagon in the CNR-MS, one might suspect that the corresponding beaded model may not have a stable equilibrium shape. But in fact this is not true. Due to the bending of hexagonal sheet made from the beads, the resulting beaded Mobius strip has a very stable equilibrium shape.

In the following figure, I show two beaded Mobius strips I made yesterday. These two Mobius strips have very stable equilibrium structures. This is different from the Mobius band made by a long strip of paper or belt. Of course, it is much easier to make a mobius band out of these materials. The resulting strips usually can adopt more conformations. One can easily distort the structure in more different conformations. So it is usually not easy to see the most stable conformation for the Mobius strip made by paper or belt.

Beaded Mobius strips are different since they have large hard-sphere repulsion among different beads when the corresponding surface is bended. Therefore the beaded mobius strip can adopt a more unique equilibrium shape in the absence of external pressure. 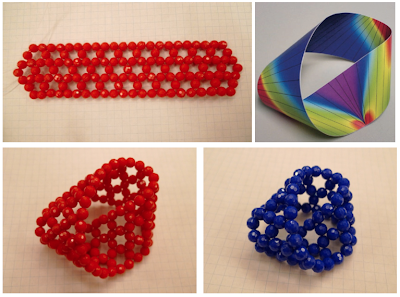 (Note that the figure in the upper right is taken from a paper in Nature Material by van der Heijden, which is about the equilibrium shape of an inextensible Mobius strip. There might be some copyright problem.)

Construction of a beaded Mobius strip based on hexagonal network is straightforward. One first construct a long strip of zigzag honeycomb lattice as shown in the upper right figure. When the strip is long enough, then we can twist the strip by 180 degrees and weave these two opposite ends together with beads. To make a more stable structure, one can use the remaining fishing thread to go through beads located on the edge. Note that there is only one edge, not two edges, for the Mobius strip. Once we do that, the resulting Mobius strip will be very stable.
Posted by thebeaedmolecules.blogspot.com at 2:11 PM

Email ThisBlogThis!Share to TwitterShare to FacebookShare to Pinterest
Labels: mobius