Carbon Nanotube Trefoil Knot is probably the most beautiful carbon structure one can make. Of course, it is extremely difficult to synthesize it if not impossible. But even though we know it is not a trivial task to make them, we still like to ask the question on the spatial arrangement of the sp2 carbons in order to make them as stable as possible. Chuang in his Ms thesis has shown a systematic way to construct this class of aesthetically beautiful molecules. He has also proved many of these molecules are indeed stable. Out of so many potential structures, we particularly like the C504 due to the similarity between this molecule and Escher's wooden knot (a poster was made to show this similarity).

Now the problem is to construct a beaded model for this molecule. We did try, but failed. Why? Previously, I used to believe that beads are generic material for constructing any 3D fullerene molecules consisting of sp2 carbon atoms. We indeed manage to build all kinds of beaded fullerenes including spheroidal, toroidal, porous, and periodic structures, in the last three years. In the mean time, the current blog was built to show the beaded models we constructed and to give some background information related to beading.

Well, trefoil knot seem to be the first class of structures we cannot use beads to construct. At the beginning, we thought this is only for C504, since the hole in the trefoil knot is too small for another segment of CNT in the same structure to pass through. So the difficulty should be removed once we move on the larger trefoil knot. I realize now this is not the real reason. In the following figure, I have shown a beaded structure for C504 (Chuang indeed has also tried to weave the similar trefoil knot as shown in the previous post yesterday).

If we inspect this structure carefully, we should see two reasons why it is not possible to make a beaded C504 trefoil knot with identical beads. The first reason is the one we just mentioned. The second reason is the number of nonhexagon pairs we need to create a 360 (2pi) loop is only about five which is too fast for the trefoil knot. To get the right structure for a trefoil knot, we need about five nonhexagon pairs to have a 3/4*2pi loop. The result is that once we have the first beaded loop constructed, the second and also third loops will be always in the wrong direction. Thus, it is almost impossible to close the final structure in a single connected way.

Another way to put it is that if we use the identical beads, the average number of beads per unit area is about the same everywhere on the beaded surface. Thus, the number of nonhexagon pairs is about slightly larger than 5. But from the structure for a real trefoil knot based on suitable force field calculations, the mean bond length in inner-rim region of loop is slightly larger than those bond lengths in the outer-region. This leads to a slower turn from the nonhexagon pairs. That is why we cannot construct this structure using beads with identical size. To avoid this problem, we have to use at least two types of beads with slightly different sizes. Of course a painful try-and-error process is necessary. 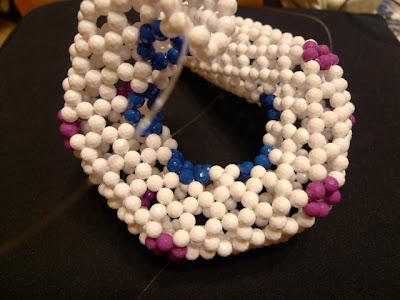 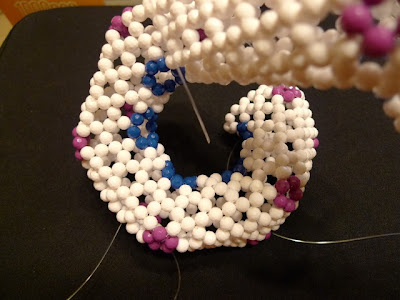 Posted by thebeaedmolecules.blogspot.com at 9:39 AM