The building block of type-II high-genus fullerenes can be chosen to be an arbitrary Goldberg polyhedron. Puncturing three holes along three carefully chosen pentagons can create a basic unit with three coordination (or a trivalent unit).
I use C60 and its Schlegel diagram to illustrate how to puncture a hole on an arbitrary pentagon.
1. Schlegel diagram of C60 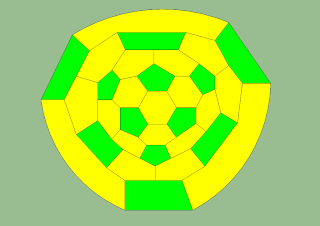 2. C60 with a hole punctured on a pentagon: one pentagon and five hexagons are replaced by five heptagons. 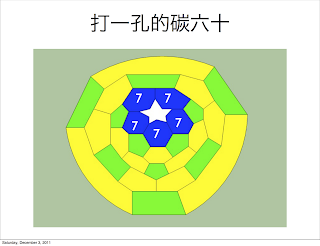 In principle, one can connect two this kind of unit with one hole to create a fused C120 with dumbbel-shape.
3. Of course, if we like, we can puncture two holes on a C60. There are three possible ways. Here I only show the situation with two pentagons separated by two hexagons. The resulting structure will contain two holes connected (or separated) by two heptagons. 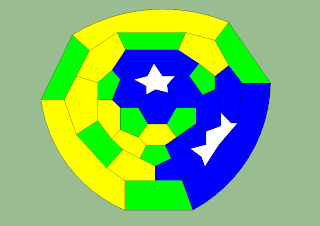 There are two other different ways to puncture second hole. If the second pentagon separated from the first one by one CC bond are punctured, the resulting structure will have an octagon. The third situation is that the second pentagon is located at the antipodal position. I will talk about these situations later.
4. Punctured C60 with three holes: 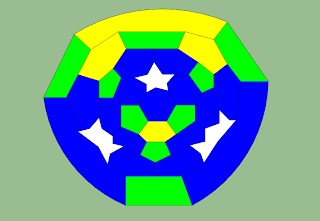 It is easy to see that there are five heptagons and five more bonds are introduced around each hole. So one needs 105 beads for creating a single unit.
5. Here are two possible weaving path. I usually used the first path though. a. non-spiral path 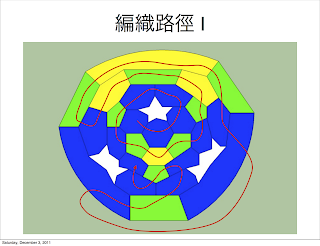 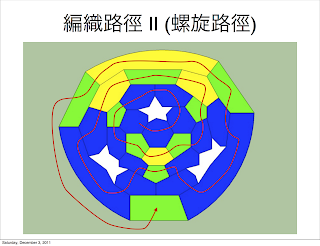 6. I am working on a project with teachers and students of the Taipei First Girls High School (北一女). We are going to make a giant buckyball consisting of sixty units of punctured C60s. Here are a few basic units I made: 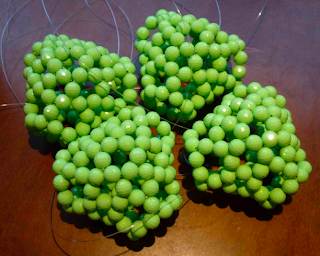 105 12mm faceted beads are used for each unit.
Posted by thebeaedmolecules.blogspot.com at 5:54 PM