I just noticed that there is a page from Medium - Everyone’s stories and ideas,
Mathematicians Solve The Topological Mystery Behind The “Brazuca” World Cup Football Just in time for the World Cup final,
which reported the manuscript, From the "Brazuca" ball to Octahedral Fullerenes: Their Construction and Classification, Yuan-Chia Fan and I submitted to the arXiv at the end of last month.
In fact, Yuan-Jia has been working on the general structural rules for this peculiar family of generalized fullerenes with octahedral symmetry for a period of time. When the FIFA World Cup started in the mid June, I noticed quite accidentally that the official soccer ball, the “Brazuca”, for the FIFA World Cup held in Brazil this year has exactly the same octahedral symmetry. Then, we rewrote the draft a little bit and changed the title to its current form. However, the manuscript was first rejected by the Journal of Chemical Information and Modelling because the paper is not of general interest to the readers of the journal. And then it was rejected again by the Journal Physical Chemistry A because the editor thought this paper falls outside the bounds of the journal.
Instead of finding another journal, I decided to put it in the print archive, arXiv, at the end of June. So people might find it interesting during the World Cup season.
The evolution of the official Adidas Soccer Balls since 1970. 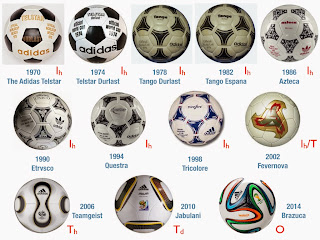 In addition to the page on Medium - Everyone’s stories and ideas, I also noticed three more pages which refer to the Yuan-Jia's work on the octahedral fullerenes and their connection to the Brazuca:

Posted by thebeaedmolecules.blogspot.com at 3:26 PM