Qian-Rui Huang made a few more bead models of EMACs using several different colored beads today. Here is one of them: 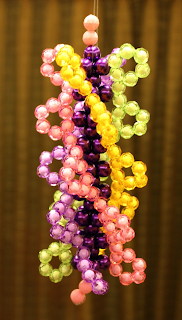 This model uses five different colors of beads, one for the central metal-metal and metal-nitrogen bonds and the other four colors for four surrounding ligands. So one can easily distinguish helically coiled ligands from the central metal string. The sizes of two different kinds of beads are 12mm and 10 mm, respectively. The pitch angle generated by this choice of beads is a little bit greater than the true molecular pitch angle. Additionally, Qian-Rui has also managed to add two axial ligands with another kind of beads to mimic N-C-S ligands. So each ligand contain three beads.
Posted by thebeaedmolecules.blogspot.com at 9:35 PM