Extended metal atom chains (Emacs) refer a family of molecules that consist of a central metal atoms with metal-metal bonds and four surrounding ligands. My colleague Shie-Min Peng is a pioneer in this field.

The shortest emacs contain three central metal atoms such as triCobalt emacs, [Co3(dipyridylamido)4Cl2]+, as shown in the following figure:

Originally, I don't think beads are suitable for making molecular model for this kind of molecules. But Chern Chuang proved that I was wrong. Today, right after I came back to my office, Chern gave me the first bead model of the longest emacs with 11 Nickel atoms that has ever been synthesized. 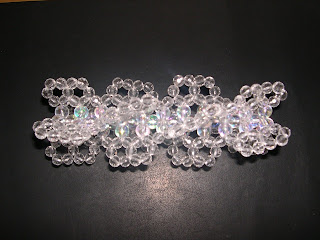 Posted by thebeaedmolecules.blogspot.com at 1:30 PM

I think Append should be interested in making one with four different colors of beads for each strand. Maybe beaded EMAC with such coloring would be clearer to view.

I can't see it too well, but to my non-chemist's eye, this looks like a relative to the structure you showed in November,2009, which you referred to as a Schenk's minimally periodic structure (or something close to that). Are they related?

Emacs (Extended metal atom chains) are very beautiful molecular wires that can be synthesized. This kind of molecules has no relation to the Scherk's singly period minimal surface, though. I will try to post a better picture later.

Although this molecule has no connection to the Sherk's singly periodic minimal surface, there are indeed some similarity between these two structures. For instance, both have a long axis, and four sheets surrounding the central axis. I guess we can probably learn more by comparing these two structures.