I played with carbon tetrapods described in the Diudea and Nagy's book last weekend and discovered quite accidentally that it is possible to make another type of hyperbolic "buckyball" with neighbored nonhexagons separated by only one CC bond. Particularly, all nonhexagons in this structure are octagons. So this one is different from another hyperbolic "buckyball" made of heptagons and hexagons, or simply heptagonal buckyball. The skeleton of this structure is the same as the heptagonal "buckyball". But each unit cell, which consists of two connected tetrapods, has 96 carbon atoms. I am not sure if people have mentioned this kind of hyperbolic "buckyball" or not.
Heptagonal "buckyball", C168 (This model was given to Prof. Sonoda as a gift when I was invited to Japan for a series of talks and workshops.): 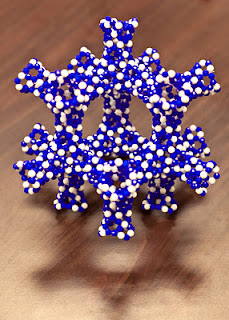 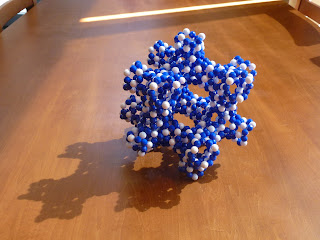 Posted by thebeaedmolecules.blogspot.com at 9:06 PM

I went to a talk given by Doug Dunham at the Bridges this year. He worked on the Escher-like hyperbolic tiling on three hyperbolic polyhedra. See this page: http://gallery.bridgesmathart.org/exhibitions/2012-bridges-conference/ddunham
These polyhedra are three dimensional realization of the corresponding hyperbolic tilings. I noticed that the third one ({3,8} polyhedron) is exactly the dual space representation of the model you showed here.

I did not have the chance to talk to him personally at the scene. But certainly I'd send him an email. He seems to be interested to put these tiles on the G surface. I feel like that I can do something on this and will keep you updated.